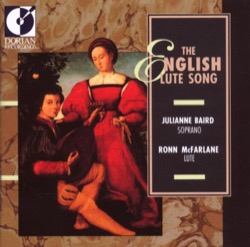 The lute songs of earlier Elizabethan times, such as those by Campion, Dowland and Morley are distinguished by directness, relative simplicity of vocal line, and musical fidelity to the rhythm of the text. Furthermore, throughout the Renaissance and early Baroque, in England as in no other country, song was shaped by the firm authority of poets, who took a dim view of the singer who might "hide the light of sense with divisions." - Julianne Baird