The Best of the Baltimore Consort 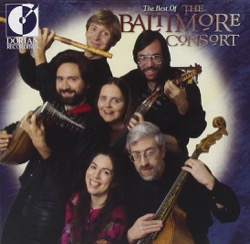 The Best of the Baltimore Consort

Two musical traditions - one as old as the other is new - characterize this ensemble. The old one is the broken consort, a name given to the ensemble of instruments that entertained the Queen of England at the end of the 16th century. . . . What's new is the fire and punch of a jazz band or rock group. In fact, two of the Baltimore Consort members have played in rock bands, and the group, writes Mary Anne Ballard, "now capitalizes on the similarities in compositional process between modern pop music and Renaissance 'broken consort' music." The essentials are one or two melody instruments, something to play a bass line, and instruments that add harmony and enhance the texture and rhythm. "It's a basic ensemble you find in many different kinds of popular music," says Ballard, "beginning with the Elizabethan period. You would have found our kind of ensemble in the pit, so to speak, at a Shakespeare performance. Others who have the same outline are a bluegrass band and a Mexican mariachi band. There's something universal about it." Ballard, who plays viols and rebec in the Consort, is a musicologist and guiding force who has been with the group since its beginnings. - Byron A. Nilsson