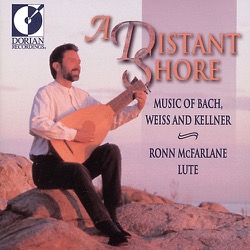 The revival of the lute and its repertoire in the later twentieth century has been so thorough that it is difficult now to remember how much a "distant shore" the instrument seemed to musicians even a few generations ago. Like the cornett or the viola da gamba or the harpsichord, it was an instrument - and a repertoire, and a set of performance practices - that was all but dead for many years, that needed to be revived more or less from scratch. As for the lute music of the later Baroque period, it represents an instrument long past its heyday: even late-Baroque musicians themselves considered the lute a distant shore - an anachronism - Kevin Bazzan