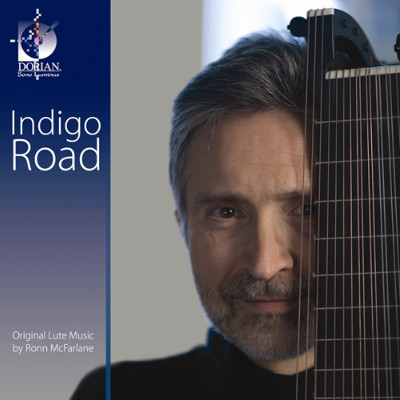 Winchester, VA – Dorian  / Sono Luminus  is very proud to announce that  world renowned American lute player Ronn McFarlane has been nominated for a Grammy Award as announced by the Recording Academy last week. McFarlane’s album Indigo Road (dorian / sono luminus) has been nominated in the Best Classical Crossover Album category. The 51st Annual Grammy Awards are to be held on February 8, 2009.

McFarlane has devoted himself to reviving the original tradition of lute composers where historically the lute player and the composer of music were one and the same by composing original, modern works for this age-old instrument. Many of the pieces on Indigo Road tread the line between popular, folk, new age and classical music where some of the works draw heavily on Renaissance and Baroque styles, while others are expressed in a more modern musical idiom. The pieces take the listener down aural roads from one composition to the next: from the peaks of Denali, to the Pinetops of Maine, into a storming sky in Blue Norther and across Uncharted Waters…listeners are transported to the future through dreams and left feeling wistful and nostalgic as if remembering the distant past.

McFarlane will be recording 2 Videos this week in support of the album and is currently touring in the east coast with famed early music ensemble the Baltimore Consort of which he is a founding member.

Ronn Mcfarlane is available for live appearances and phone interviews. To request an interview or a copy of the Grammy-Nominated CD please contact: