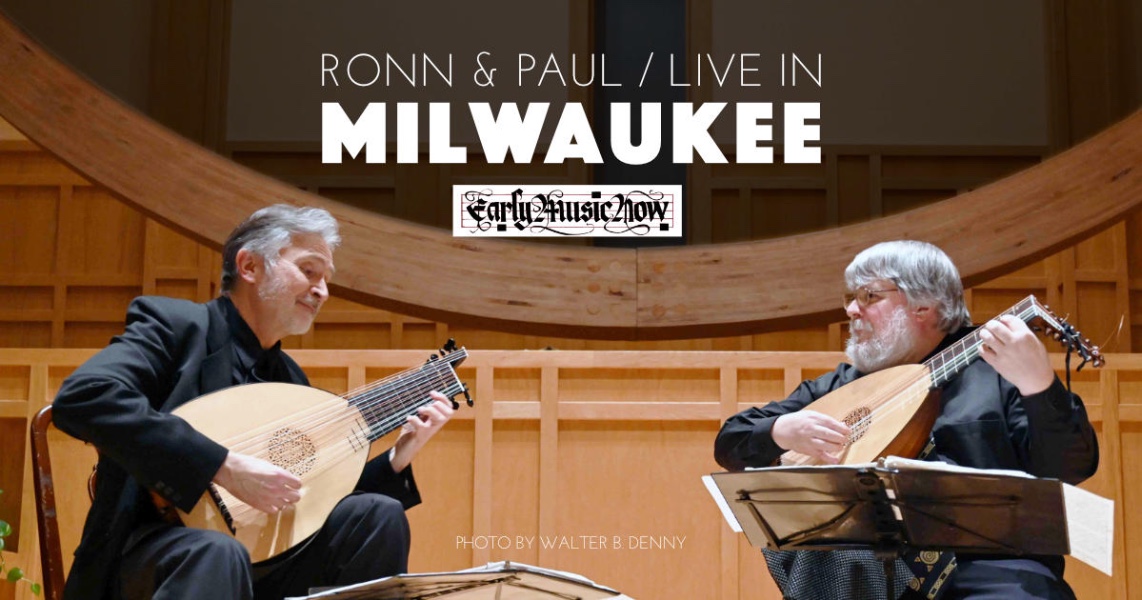 ‍‍There are more than a few glib ways to start a review of this concert:

“The only thing better than one lute virtuoso is two lute virtuosos” or ”dueling lutes become friends.” Instead, let’s start it with a couplet written by anonymous and bigoted wit of the past:

Although bass drum and hammered dulcimer players might not agree, the lute playing of Paul O’Dette and Ronn McFarlane on Saturday at the UW-Milwaukee Zelazo Center as part Early Music Now’s concert series gives the rhyme at least a small measure of credence. For what more noble sound could be imagined than those made by these two remarkable musicians? Their cascade of perfectly placed plucks was pleasing beyond measure.

A tired word often found in music reviews is “soaring”. Here that word has no place. The sounds realized by O’Dette and McFarlane conjured up a far more subtle delivery of sound. These lutenists used no electronic amplification. Only Zelazo’s acoustic shell, and the hollowed out bowls of the instruments themselves served to send out their delicate and intimate sounds into a large space. It was music playing that issued a wonderful challenge to the fortunate audience: “we are not coming to you. You come to us.” Nothing soared. These musicians convinced not by flying high, but by inviting their listeners to come in close.

Such softness invited in something else. The sounds of a passing delivery  truck or an occasional Harley motoring by on Kenwood Boulevard could not be kept out of the hall. But rather than annoy, these aleatoric everyday sounds, so far removed from the territory of old music, gave perspective. “Listen harder” those street sounds seem to say. “The harshness is outside and you are inside in the presence of sweetness and music-making of the highest order. Listen as if your lives depended on it.”

A soaring musical utterance may have worth, but to this opinionated correspondent, a perfect pluck possesses more. It has wisdom. Leave the soaring to sackbutts and divas. O’Dette and Mcfarland took us in so close that we became willing and fortunate captives to their ground bases, points of imitation, and divisions. A splendid fate.

Now to the music: let’s see if a “stream of consciousness” approach works (with apologies to William James and Laurence Sterne). What follows is informed by O’Dette’s superb written program notes, both musicians’ spoken remarks from the stage, and this writer’s own mental convolutions on the composers and pieces performed:

Joanambrosia Dalza: sanctity of an honest drone underneath quick-silver divisions…Francesco de Milano: that canon is a real fast chase…short but sweet…Vincenzo Galilie: family music for brothers to play…a commingling of hardness, softness, math, science, music (a tasty omelette better than any gambist or keyboardist could stir up)…Claudio Merula and Giovanni Antonio Terzi: “O’Dette says Terzi’s music is of such Paganini-esque difficulty that it is unplayable, and then he and McFarlane proceed to play it….Alessandro Piccinini: edgy stuff made for hipsters with long fingernails…Heironymous Anonymous: rustic tunes teamed up with improvised divisions realized by highly educated fingers, with comic cadences thrown in for good measure….John Dowland: the king of fantasy…John Johnson: damn, is this guy under-celebrated.

…And finally came an encore, a piece for two to play upon one lute: Both musicians managed this logistically  challenging trick cleverly and flawlessly. A delightful ending….”

From the above jumble, the reader can see that this memorable concert was devoted to an impressively diverse sampling of Italian and English lute music of the 16th Century. It  contained music written by everyday names (Dowland, Da Milano, Galilei) and more obscure masters whose music deserves much more attention.

The publicity for this remarkable concert called it “Dueling Lutes.” Continuing this trope: if this was a duel, it was one where swords were turned into the sweet plowshares of ground basses, divisions, points of imitation and the sweetness of rustic dance.