The Lute A Brief History 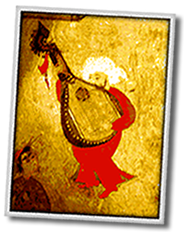 The lute is the descendent of the Arabic Oud which traveled into Europe during the time of the Crusades. From the beginning, the lute had a pear-shaped body, a rounded back made of separate strips of wood, and a bent-back pegbox.

But the actual pitch would vary depending on the size of the lute. A common tuning instruction of the time was "tune the treble string as high as it will go without breaking, then tune the remaining strings in accordance with the first."

About this time, lute players began to abandon the plectrum and pluck the lute with their fingertips. This made it possible to play two, three or even four lines of music simultaneously. With this revolution in playing technique, the lute's potential for expressivity and shading with delicate nuances of color were revealed, and its popularity increased dramatically. The lute became the perfect solo instrument for the age, as well as an ideal accompaniment for the voice and a regular member of ensembles. 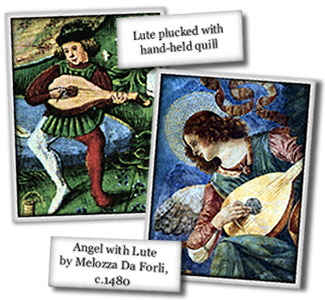 Along with the new fingertip style of playing a new form of notation for the lute began to appear. This "lute tablature" was ideally suited for the technique of the lute.

Rather than representing the pitches to be played, lute tablature shows the lute player where to place the fingers on the fingerboard in order to produce those pitches. Throughout the Renaissance, almost all lute music was notated in one of the three forms of tablature (Italian, French, and German) which first appeared around the beginning of the sixteenth century. 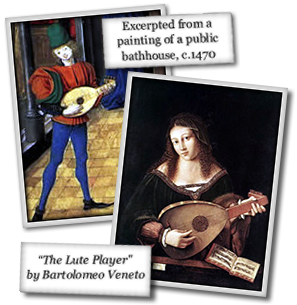 Thousands of lute solos and lute songs were published or copied into manuscripts during the sixteenth century. Many of these were intended for the blossoming numbers of amateur lutenists, who learned to play and often sing to the lute. 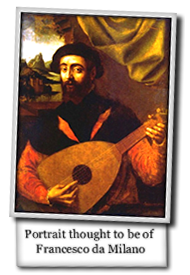 Great composers such as Francesco da Milano and John Dowland amazed, moved and transported their listeners with virtuoso playing and profound compositions. Here is a famous account of one listener's impressions upon hearing Francesco da Milano perform:

"He had barely disturbed the air with three strummed chords when he interrupted conversation which had started among the guests. Having constrained them to face him, he continued with such ravishing skill that little by little, making the strings languish under his fingers in his sublime way, he transported all those who were listening into so pleasurable a melancholy that...changing his style of playing with a gentle force, he returned the spirit and the senses to the place from which he had stolen them, not without leaving as much astonishment in each of us, as if we had been elevated by an ecstatic transport of some divine frenzy." 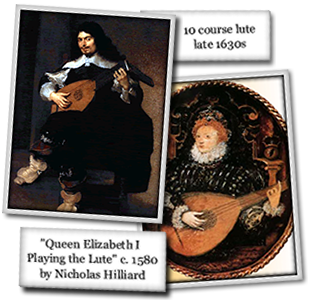 By the end of the sixteenth century additional bass courses had become common. Lutes with seven or eight courses became the norm. And early in the seventeenth century the 10-course lute was established, with the tuning: 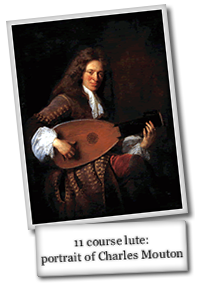 In the seventeenth century, France took the lead in the lute's development. French lutenists established a repertory of lute solos based on stylized dances. They experimented with a variety of alternate tunings to create new sonorities, and by mid-century had settled on a new tuning for a lute of 11 courses:

This new "d minor tuning" was the basis for all the French and German lute music that followed in the seventeenth and eighteenth centuries. 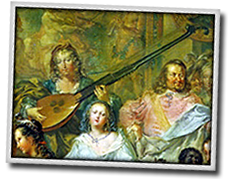 In seventeenth century Italy, the bent-neck lute was soon replaced by the archlute and the chitarrone (also known as the "theorbo"). The archlute retained the old Renaissance tuning, but added a full octave of bass strings, creating a tuning of:

The bass strings were mounted on a bass extension, giving them nearly twice the string length of the treble strings. Naturally, this gave the bass more strength and volume. 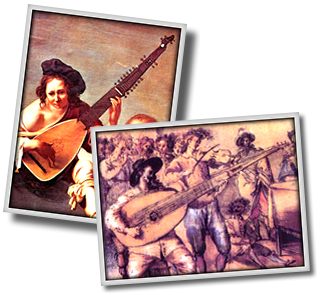 The theorbo or chitarrone became the preferred accompaniment instrument of the era. Like the archlute it had a long bass extension, but the whole instrument was larger, including the length of the treble strings. It had a deeper, more powerful sound and an unusual tuning in which the first two courses were tuned an octave lower than on the lute: 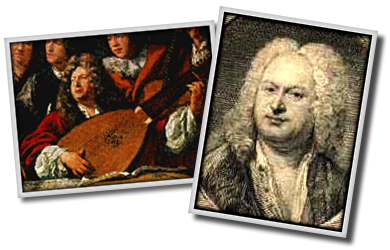 By the eighteenth century the lute's greatest popularity and place of development had shifted to Germany. Silvius Leopold Weiss (1687-1750) towered over all other lutenists of the Baroque with his virtuoso playing and sublime compositions. He developed creative, idiomatic ways of using the lute's fingerboard and left the largest body of lute music of any composer in history. His compositions are some of the most deeply beautiful of any music written for the lute.

Weiss added two more courses to the bass register of the lute, creating a 13-course lute with the tuning:

He also straightened the bent back pegbox to create a "swan-neck" design for the bass strings. This gave the bass more power and resonance. 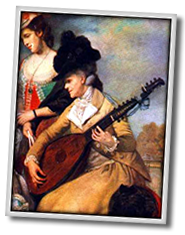 The music of Weiss resembles the style of J. S. Bach, whom he knew and visited. Perhaps these visits inspired Bach to write for the lute as well.

Bach himself owned a lute, and wrote a small amount of music for it. He also arranged some of his violin and cello music for the lute.

After the death of Weiss and Bach in 1750, the lute's popularity dropped to a low ebb. Still, a handful of composers continued to play and write music for the lute until the end of the eighteenth century. One of the last pieces for the lute was a set of variations by Scheidler on a theme by Mozart.

In the nineteenth century, the lute dropped completely out of use. 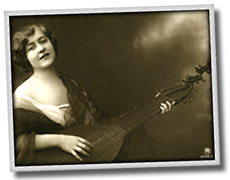 It was eventually resurrected by an interest in music of earlier times which began to blossom in the late nineteenth and twentieth centuries. The virtuoso guitarist and lutenist Julian Bream (b. 1933) did much to enlighten listeners about the emotional depth and dazzling fireworks of Elizabethan lute music. 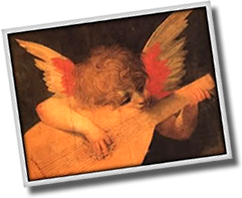 The Early Music movement of the late twentieth century saw a new generation of lutenists dedicated to rediscovering the old performance practices. The tremendous beauty, variety and color of Renaissance and Baroque lute music can now be heard in their performances. And the amazing musical flexibility of the lute is revealed through new compositions, written in a variety of styles. After two hundred years of neglect, the future of the lute once again looks bright.